WORKING ROUND THE CLOCK TO HELP LOCAL RESTAURANTS

WORKING ROUND THE CLOCK TO HELP LOCAL RESTAURANTS 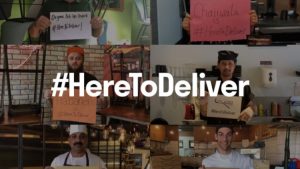 Within minutes of a customer making an order, Deliveroo puts locally cooked food on tables in homes all over the world. Within days of the Covid outbreak, it threw lifelines to its international network of 80,000 restaurants.

Deliveroo’s approach to tackling the crisis was to make things easier for its partners. It reduced the joining fees for new eateries (from the equivalent of €485 to €55); and dropped the joining fee completely for new, small and medium sized restaurants. It also launched its #heretodeliver social media campaign. On hardware, Deliveroo said restaurants could use laptops and smartphones as well as tablets. And it shrank cash remittance times: UK settlement times were shortened from two weeks to a single day. Similar moves were made in other countries.

Deliveroo itself only thrives if it has a healthy network of restaurants as members. With bustling city centres, high streets and neighbourhoods becoming ghost towns overnight, it had to innovate.

“We have been working around the clock to help the restaurant community,” says Luigi De Curtis, Deliveroo’s commercial director specialising in small and medium-sized businesses.

Implementation rolled out as the virus threats rose. Pre-planned blueprints were not so much of a consideration as was responding quickly to unfolding events, arriving at a clear idea of what meaningful changes could be made, and getting on with the jobs at hand.

De Curtis says: “It has been super-quick. . . everything has been done without the need for a lot of planning.”

There is, therefore, a lesson for businesses big and small. Trust the powers of instinct. After all, the Covid crisis has reminded us that life is a succession of surprises.

Covid, says De Curtis, has made the vast majority of people more concerned about community contributions. “I think people have a good sense of community in general, but it is stronger in moments of challenge and need. It’s human nature to help.” Deliveroo’s help for the UK’s National Health Service points directly at that ambition. It promised to supply 500,000 free meals to NHS workers stretched by the sheer numbers of patients burdened with coronavirus and other ailments.

“It is always super-important to us to work with all our stakeholders – customers, riders and restaurants – in ways that help everyone,” says De Curtis.

Headquartered in London, Deliveroo was started in 2013 by Will Shu and Greg Orlowski. It operates in more than 550 towns and cities in 12 countries including the United Kingdom, the Netherlands, France, Belgium, Spain, Italy, Australia, Singapore, Ireland, United Arab Emirates, Hong Kong, and Kuwait. It has 60,000 delivery riders on its books as well as 2,500 staff, who prior to lockdown had been based in offices.

As Covid spread at its alarming rate, Deliveroo made special efforts for restaurants that were previously dine-in only. “In the UK alone, we saw 3,000 new restaurants join the platform in mid-March to April,” says De Curtis. Among the new recruits are Michelin-starred restaurants including Hakkasan and Roka in the UK.

The accelerated expansion kept hygiene, always a priority in food preparation, at the top of the agenda. In the UK, Deliveroo incorporated Food Standards Agency hygiene star ratings as a customer selection filter; it introduced no contact protocols for pickup and delivery and expanded marketing support: one strand of that, says De Curtis was adapting menus. “Dine in menus don’t always work online.”

The most important thing, says De Curtis, was “Keep it simple”. That’s part of Deliveroo’s DNA anyway. “Our approach to the Covid changes was the same. We made things as easy as possible.”

Deliveroo is one of several tech-savvy enterprises that has led, and is feeding, burgeoning demand for take-out food. There are two distinct types. Many are so-called ‘aggregators’: online hubs, mostly, which link outlets to consumers and process orders. Deliveroo is different because it operates a physical delivery network as well as digital marketing. These are termed ‘new delivery’ operators.

The broader trends are partly driven by long term life-style changes. New technology makes it possible to connect suppliers with customers. The globalisation of tastes, and supply chains, is another contributory factor. Deliveroo is part of the transformation. “A key ingredient of our success is having the best selection of popular restaurants to choose from”, it says. “Whether people want a pad Thai in the evening, a salad at lunch, or freshly scrambled eggs for breakfast – we’ve got it covered.”

The UK Consumer Pulse survey by McKinsey & Company, the consultancy, shows that a fifth of respondents (21 percent) were either using restaurant delivery more or had recently started using the services. That is one of the bigger shifts in consumer behaviour.1

Some of the new popularity for home delivery may prove temporary. The chances are, though, that demand for Deliveroo-style services will continue to grow. Analysts at Nielsen, the consumer research business, looked at the way Asian consumer patterns shifted as a result of Covid. Vaughan Ryan, managing director for Nielsen in South East Asia, says: “Consumer thinking and actions have been reoriented, and this will have long-term consequences. For many, old habits like eating out may forever be replaced by new habits, more apt to new, altered environments. Not only will consumers reassess where they’re eating, but they will also be far more cognizant of what they’re eating.”2

Deliveroo’s rapid response to Covid has seen one shift that may become permanent. Before the crisis, around half of all orders taken were for singles. During lockdown, that number dropped to 30 percent. Instead, multi-meal orders – for households in other words – became predominant.

Any cookies that may not be particularly necessary for the website to function and is used specifically to collect user personal data via analytics, ads, other embedded contents are termed as non-necessary cookies. It is mandatory to procure user consent prior to running these cookies on your website.